Archimedes is deciding what to name his discovery...

So you want to be a Kotlin programmer?

You’ve come to the right place!

This series will take you through the fundamentals of Kotlin, gently introducing you to the core concepts of the language, in order to help you become a proficient Kotlin developer. Even if you’re a seasoned pro, it’s important to know the fundamentals in order to establish a solid foundation of understanding, so that you can be as effective as possible.

Your adventure starts here in Chapter 1, where we’ll cover the basics of variables, expressions, and types.

This is a circle. 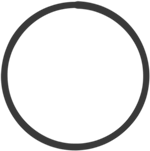 Thousands of years ago, a Greek fellow named Archimedes roughly figured out how to measure the length of the outside of a circle, called the circumference. You probably remember the equation the good old days of junior high school:

“The circumference of a circle is equal to 2 times π times the radius of the circle”.

In the equation above, the letter r isn’t a number itself. It’s a letter that represents the radius - a number that measures the distance between the center of the circle and the edge of the circle. 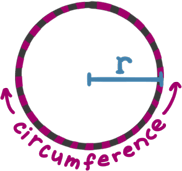 We call r a variable, because the radius can vary, depending on the size of the circle. In other words, the variable r isn’t a number itself; it’s just sort of a “bucket” that holds a number - any number. 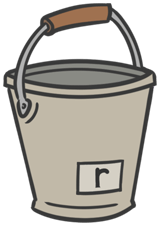 Variables aren’t just for algebra and geometry. They’re also used all the time in programming, where they serve the same purpose: holding values. In Kotlin, you can create a variable and put a number into it like this:

Listing 1.1 - Creating a variable in Kotlin

This code is actually doing two things on one line. 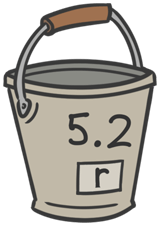 Let’s break down the three main parts of this line of code:

var is just one of many keywords that we’ll see as we continue to learn Kotlin. The important thing to remember about keywords is that they can’t be used as the name of your own things. For example, you can’t use var as the name of the variable:

We’ll come across other keywords in future chapters.

As we noted above, in the equation 2πr, the variable r can represent different numbers in different situations.

In Kotlin, if you decide that you want r to represent a different number, you can just reassign it, as shown in the second line here:

Listing 1.3 - Assigning and then reassigning a value to a variable

When reassigning this variable, we didn’t need to use the var keyword again, because the variable was already declared on that first line.

Variables that Cannot Be Reassigned

The Greek letter π (pronounced like the word “pie”) is very different from the variable r. Whereas r can hold any number in it, π only ever holds one very specific number, which we’ll abbreviate to 3.14.

In the same way, when programming in Kotlin, there are times when you want to make sure that a variable never changes. 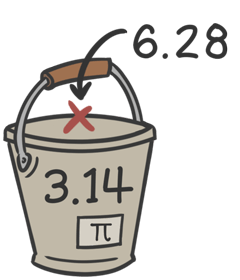 In those cases, instead of declaring it with var, you declare it with val, like this:

Now, if you try to reassign π, you’ll get an error:

Listing 1.5 - Error: "Val cannot be reassigned" (does not compile)

Once you put something in this bucket, you can never replace it!

Declaring your variables with val is a great way to make sure that you don’t accidentally change something that shouldn’t change. In fact, it’s a great idea to always start with val, and only switch to var when you absolutely need to.

If you’re already familiar with the concept of objects, it’s important to note that val does not make objects immutable. In other words, you can’t put something new in that bucket, but what’s in that bucket could still change itself in some way. That’s why Kotlin programmers tend to call variables declared with val “read-only” instead of “immutable”.

We’ll cover this distinction in more detail once we get to the chapter on classes and objects.

It’s been fun using the letter π in our code, but unless you live in Greece, you probably don’t have it on your keyboard. From here on out, we’ll make life easier for everyone by naming it pi instead. Also, instead of r, we’ll name it radius, so that any other developers who come along later will know exactly what that variable represents - we don’t want others to have to guess what the letter r stands for!

Sometimes you need more than one word for a variable’s identifier. In Kotlin, it’s customary to start the first word lowercased, and then capitalize the remaining words, like this:

It’s a good idea to write your code in a way that’s similar to other developers, so that when everyone looks at it, they don’t have to think too hard about it.

The official Kotlin documentation provides a set of coding conventions, and it’s recommended that you follow those. In case you use IntelliJ or Android Studio, that document also tells you how you can configure a formatter that will help you more easily conform to some of those conventions.

Expressions and Statements in Kotlin

Let’s look at that equation again:

We’ve already created a variable for pi and a variable for radius, so now we just need Kotlin to do some math for us, and we can get the circumference of any circle, regardless of how big that circle is.

Listing 1.7 - Assigning a complex expression to a variable

So far we’ve only assigned simple values - such as 5.2 and 3.14. This is the first time we’re assigning something more complex: 2 * pi * radius.

When Kotlin sees this, it simply calculates the result for you - it multiplies 2 times pi times radius, and then, of course, it takes the resulting value and assigns it to the variable named circumference. In this case (with a radius of 5.2), circumference will equal 32.656. 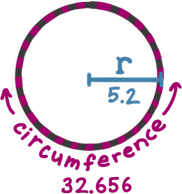 Variables by themselves are also expressions - they evaluate to whatever value they hold:

When you type out a number by hand (as opposed to typing a variable), it’s called a number literal. Literals themselves are also expressions - they evaluate to themselves! Here are a few examples:

All of those examples will evaluate to some value. On the other hand, when you have a chunk of code that does not evaluate to a value, it’s called a statement.

Here’s an easy rule of thumb to know if you’ve got an expression or a statement:

Rule: If you can assign a chunk of code to a variable, it’s an expression. Otherwise, it’s a statement.

Let’s apply this rule to the first expression from each of the three lists above (2 + 3, radius, and 2). The parts highlighted below are the expressions:

Listing 1.8 - You can tell each of these is an expression because each can be assigned to a variable.

Since each of those can be assigned to a variable, they’re all expressions.

Listing 1.9 - Error: "Expecting an expression" (does not compile)

The distinction between statements and expressions is important as you’re learning Kotlin, and we’ll use those terms often in this series.

So far, whether we’ve used literals or complex expressions, we’ve still only ever assigned numbers to variables. But there are lots of different things that variables can hold! Let’s explore some of these things next.

In Kotlin, different variables can hold different kinds of values. The kind of value that a variable holds is called its type.

Let’s take another look at the variables radius and pi:

In this case, both radius and pi represent numbers that have a decimal point, which is a type that Kotlin calls a Double. If you want to, you can tell Kotlin the type of the variable yourself, like this:

Listing 1.11 - Explicitly specifying the type of these two variables

When we do this, we are explicitly specifying the type.

Very often, you do not have to specify the type of a variable yourself. In that case, Kotlin will do its best to infer the type based on whatever it is that you’re assigning to the variable. That process is called type inference.

So, when we write this…

Listing 1.12 - Allowing Kotlin to apply type inference. The radius variable still has a type of Double.

…then Kotlin can tell that 5.2 is a Double, so it automatically uses Double as the type of radius.

It’s usually nice to let Kotlin do type inference for you, but sometimes it’d still be nice to see what type it inferred.

To see what type Kotlin inferred, IntelliJ and Android Studio have a feature called Quick Documentation. Just put the text caret on the variable name, and hit the keyboard shortcut. By default, that shortcut is F1 on Mac, and Ctrl+Q on Windows and Linux.

In addition to Double, there are some other basic types that are good to know about! Let’s take a look at some of those now.

These kinds of numbers are called integers, and in Kotlin the type for an integer is just called Int for short. Here’s an example of creating an integer variable:

Listing 1.13 - Declaring and assigning an integer variable. Here we explicitly specify the Int type, but that’s not required.

Sometimes you want a variable to hold a value that is either on or off, yes or no, true or false, and so on.

In those cases, you want a Boolean variable.

Why is it called a Boolean?

It’s named after a British chap from the 1800s, George Boole, who created a branch of algebra that works with true and false values instead of numbers.

You can also store text into a variable. The fancy programmer word for this is string, because it’s a bunch of characters - such as letters, numbers, and symbols - “strung” together:

In Kotlin, the type for this is called String, and you can create a String variable like this:

These are just some common types of variables. As we continue this series, we’ll find out how we can create our own types - classes - which build upon these basic types that we just looked at.

In Kotlin, the type of each variable is established when you’re writing the code, and its type will never change (unless you rewrite the code). This is why we call it static typing. Once a variable has been declared with a particular type, no other type of value can go into it. For example, if we create a variable of type Int, we can’t later reassign it with a String:

In future chapters, we’ll see how this static typing plays out in more ways than just reassigning variables. We’ll also see how some types can have subtypes.

But we’re getting ahead of ourselves - for now, let’s wrap up this chapter!

In this chapter, we looked at:

Now that we have a good grasp on variables, it’s time to put them together in exciting new ways! Stay tuned for chapter 2, where we’ll learn all about functions in Kotlin!

Thanks to Matt McKenna, Jacob Rakidzich, and Doug Smith for reviewing this article.