If you’re just landing here and you’re new to the Kotlin language, be sure to head back to chapter one and catch up!

As we saw in the last chapter, calculating the circumference of a circle is easy:

And here’s some Kotlin code that we wrote to do that calculation:

Listing 2.1 - Calculating the circumference of a circle that has a radius of 5.2

Well, we could just write out the equation multiple times.

This certainly works, but wow - look at how we had to type the same thing over and over again!

When we have the same code over and over again like this, we call it duplication. In most cases, duplicated code is bad because:

Let’s change our code so that we only have to write 2 * pi * radius one time, and then use that to calcuate the circumference of any circle. In other words, let’s remove the duplication!

Even though we wrote 2 * pi * radius three times, the only value that actually changed each time was radius. In other words, 2 never changed, and pi never changed (it equaled 3.14 each time). But the value of radius was different each time: first 5.2, then 6.7, and then 10.0.

Now, we won’t be creating a real machine, but instead, we will create a function, which will do exactly what we want - we’ll give it a radius and get a circumference back from it!

Here’s how you can write a simple function in Kotlin:

This looks like a lot, but there are really just a few pieces, and they’re all easy to understand.

Let’s compare our function with the machine we imagined above: 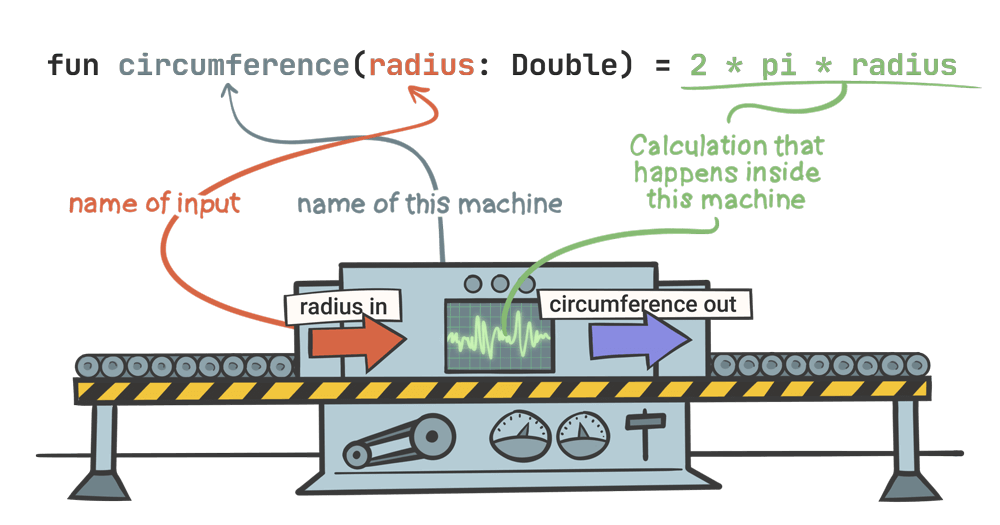 You might recall from the last chapter that you often don’t have to specify the type of a variable, and instead let Kotlin use its type inference. You can also use type inference when writing functions like this. Just leave off the return type, so that it looks like this:

Listing 2.3 - Using Kotlin’s type inference on a function by leaving off the return type.

Kotlin programmers will often use type inference for simple functions like this one.

If you’re using IntelliJ or Android Studio, there’s a setting that will let you see what the return type is, even when you’re using type inference.

To turn it on, go to Editor, then General, then Appearance, and checkmark the option that says, Show parameter name hints. Also, hit the Configure button, choose Kotlin as the language, and make sure that Show function return type hints is checkmarked. 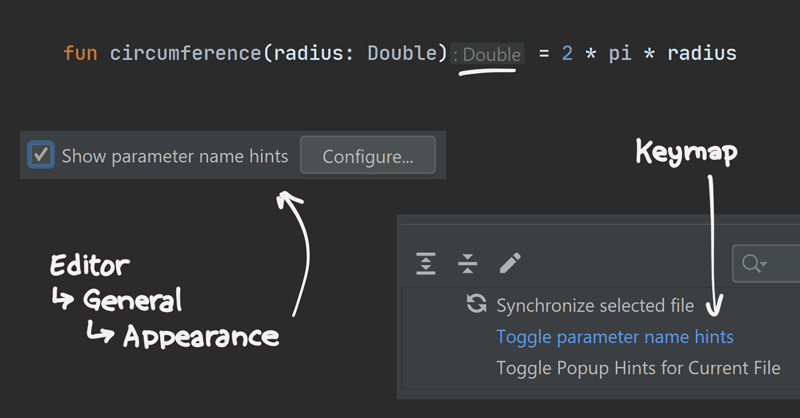 If you don’t want to always see the hints, you can map a keyboard shortcut to Toggle parameter name hints under the Keymap section of the settings.

And now that we’ve created our function, it’s time to use it!

Here’s how you call a function in Kotlin:

From this point forward, I’ll usually include the parentheses after the name of a function. For example, I’ll refer to it as circumference() rather than just circumference. This is done to help make it clear that I’m referring to a function.

What happens when you call a function? Let’s say we wrote a function and called it, like this:

Listing 2.4 - A function definition and a function call.

When we call that function, it’s kind of like we’re just plopping the body of the function - 2 * pi * radius - right where we see the function call - circumference(5.2).

Listing 2.5 - When you call a function, it’s almost like you’re substituting the function call with the body of the function.

Then, since we passed 5.2 as the radius, we could imagine substituting the value 5.2 where we had plopped in radius:

Listing 2.6 - When calling a function, imagine that you’re substituting the parameter name with the argument value that was passed in.

Now that we’ve got a function that can calculate the circumference from a radius, we can call that function as many times as we need!

Listing 2.7 - Calling the circumference() function three times in a row.

Doesn’t this look nicer than Listing 2.2? Because we have a function, we don’t need to write 2 * pi * radius over and over! Instead, we just call the circumference() function once for each circle.

Arguments and Parameters: What’s the difference?

It’s easy to confuse an argument with a parameter, so it’s important to understand the distinction:

For an easy way to remember the difference, check out this mnemonic.

Functions with More Than One Parameter

Even if physics class was a while ago, you probably know how to calculate speed. It’s easy to remember, because we say it aloud all the time - “The speed limit is 100 kilometers per hour”.

“Kilometers per hour” is just distance (“kilometers”) divided by (“per”) time (“hour”).

In Kotlin, you use a forward slash to represent division. You can think of it as a fraction that fell over to the left: 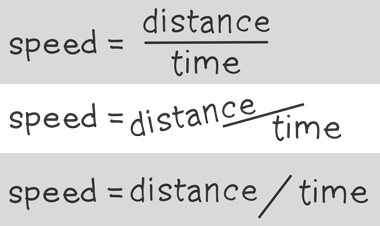 To start with, let’s just write some simple code to calculate the average speed of a car that has traveled 321.8 kilometers in 4.15 hours.

Now, let’s turn that distance / time expression into a function. In order to create a function for speed, we need to know two things: distance and time.

In Kotlin, when you need a function with two parameters, you can just separate those parameters with a comma, like this:

Listing 2.9 - Defining a function that has two parameters.

When you need to call this function, the arguments are also separated with a comma. For example, we can call the speed() function with the same values as we used above, separating those values with a comma:

Listing 2.10 - Calling a function that has two parameters.

The result is about 77.54 kilometers per hour.

Note that the arguments here are in the same order as the parameters.

In other words, the position of the argument matters when we call a function this way, which is why we sometimes refer to arguments like these as positional arguments.

But this isn’t the only way to pass arguments to a function!

Rather than relying on the position of the arguments, you can instead use the name of the parameter, like this:

In other words, all five of these function calls will end up with the exact same result:

Listing 2.13 - Multiple ways to call a function with the same two arguments.

Note that if you’re using Kotlin 1.3 or below, the second line of this listing will fail with an error that says, “Mixing named and positioned arguments is not allowed”, but this will be supported in Kotlin 1.4 and above.

In some cases, you might find yourself passing the same argument value to a function over and over again. For example, maybe you’re calculating how fast: 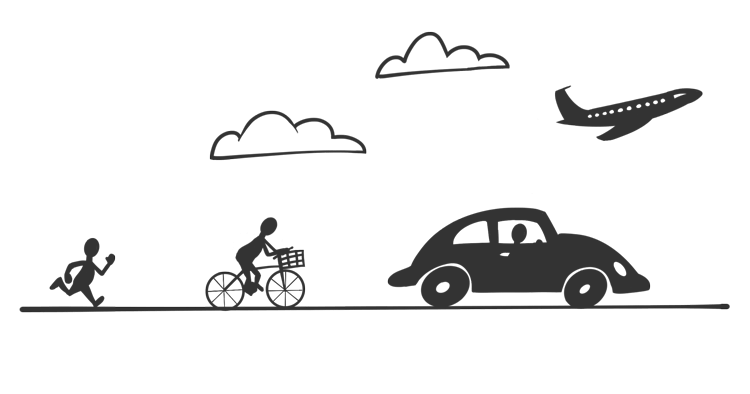 Everybody was moving for 2.0 hours, except for the plane, which got to its final destination in only 1.5 hours. Using our speed() function from above, you can calculate the speeds like this:

Listing 2.14 - Calling a function with the same argument value. The time is 2.0 for the first three function calls.

Instead of having to pass 2.0 for the time parameter over and over, you could choose to make 2.0 a default argument when we define the function.

Let’s update our speed() function so that the time parameter defaults to 2.0.

Listing 2.15 - A function with a default second argument.

Now, we can omit the argument for time whenever it should equal 2.0, like this:

Listing 2.16 - Calling a function with a default argument.

For walking, biking, and driving, we left off the time argument, so those defaulted to 2.0. But for flying, we passed 1.5. The results for Listing 2.16 are exactly the same as those for Listing 2.14.

But what happens when you want a default argument for the first parameter instead of the second parameter?

When a Default Argument Comes First

Our walker, biker, driver, and pilot are at it again. But this time, it’s a race! Whoever gets to the finish line 42.195 kilometers away gets the prize.

Everyone finished the race, except for the airplane, which got a flat tire before it could get off the ground:

Listing 2.17 - Calling a function with the same argument value. The distance is 42.195 for the first three function calls.

Instead of setting a default time, let’s set a default distance of 42.195:

Listing 2.18 - A function with a default first argument.

Since the walker, the biker, and the driver all travel the same distance, we should be able to omit the value for the first parameter, distance. You might be tempted to call the function like this:

But this causes an error: No value passed for parameter ‘time’. Why did that happen?

Since we’re using positional arguments, we actually ended up omitting time instead of distance.

In other words, we wanted to assign 8.27 to the time parameter, like this:

To tell Kotlin that we’re sending the time instead, we simply use named arguments, like this:

Listing 2.20 - Accepting the default argument for the first parameter of a function.

Now, the first parameter, distance, will default to 42.195 when we call speed() for walking, biking, and driving.

So far we’ve been writing functions that just evaluate an expression.

Let’s look at our code for circumference() again:

Listing 2.21 - Our circumference() function, which has an expression body.

When we write a function this way, where the body is just a single expression, we say that the function has an expression body.

Kotlin also gives us a second way that we can write functions. Let’s rewrite the circumference() function using this second way:

Listing 2.22 - Our circumference() function, rewritten to have a block body.

When we write a function like this, we call it a function with a block body.

The way you write a function with a block body is a little more complex than the way we’ve written expression body functions so far, so let’s take a closer look at the new pieces:

First, notice the : Double after the parentheses. We were able to use type inference for expression bodies, but when we use a block body, we must specify the return type explicitly.

Next, notice the opening and closing braces: { and }. Everything between those two braces is referred to as a code block (which is why we call this a function with a block body!)

For example, so far we have defined pi outside of our function. But it’d be great to define it inside the function instead:

Functions without a Result

There are times when you might want a function that doesn’t return a result. For example, let’s say we have a variable that holds a number that increases over time, named counter. We’ll create a function named increment(). Every time we call that function, it’ll increase counter by one, by writing the statement counter = counter + 1.

Functions with expression bodies can only contain a single expression. We cannot use a statement in an expression body. For example, we can’t do this:

Listing 2.25 - Error: "Assignments are not expressions, and only expressions are allowed in this context

Instead of using an expression body, it’s better to use a block body for this function instead:

Listing 2.26 - A function with a block body that does not specify a return type.

You probably noticed that we didn’t specify a return type on this function.

That’s right! When you omit a return type for a function that has a block body, it automatically returns a special Kotlin type called Unit.

Unit - it’s not a number or string, and you can’t really do much with it. But it ends up being helpful in some cases that we’ll explore when we get to generics in a future chapter.

But for now, let’s wrap up the current chapter!

In this chapter, we learned:

Next up in chapter 3, we’ll learn all about conditionals in Kotlin, so that we can get our code to do different things in different situations. See you then!

Thanks to Louis CAD, James Lorenzen, Matt McKenna, and Charles Muchene for reviewing this chapter.