Kotlin Conditionals: When and If

Similarly, we often need our code to do different things in different situations.

In this chapter, we’ll learn all about conditionals in Kotlin, which will allow us to change the way the code runs depending on circumstances!

Goldilocks and the Three Branches

You might have heard the fairy tale of Goldilocks and the Three Bears.

Papa Bear, Mama Bear, and Baby Bear lived in a quaint house nestled in the woods. One day, after preparing some porridge for breakfast, the three bears decided to go out for a leisurely stroll.

Meanwhile, a young girl named Goldilocks peeked in through the window and saw three bowls of porridge. Since she was hungry and saw nobody home, she decided to walk on inside and taste the porridge for herself.

Let’s map out Goldilocks’ reaction to the three different bowls of porridge into a simple table:

Goldilocks responds differently depending on the temperature of the porridge.

We can write Kotlin code that will tell us which of these three things Goldilocks will say, based on the temperature of the porridge. In programming terms, the three different cases above - that is, the three different rows of the table - are called branches. If it helps, you can visualize the branches like you’d see on a tree: 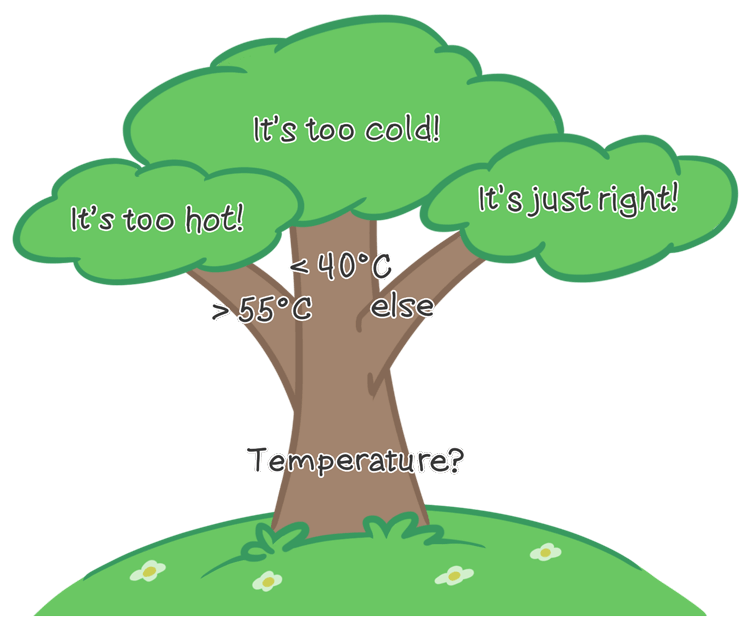 So far, when we’ve run the code that we’ve written, every line of code has run. But now, we’re going to start writing code instead where only one of the branches will run each time. While your code is running, the path that is run - including the particular branch that it takes - is referred to as the execution path.

Here you can see the three possible execution paths that our Kotlin code could take, depending on the temperature:

Code constructs that choose between different branches (e.g., different responses from Goldilocks) based on some condition (e.g., the temperature) are called conditionals.

So how can we write Kotlin code that tells us how Goldilocks will respond to each bowl of porridge? Kotlin has a couple of conditionals that we can use. Let’s check ‘em out!

Introduction to when in Kotlin

Let’s look at that table again.

A table like this is easy to read and understand. We can just scan down the left-hand column, and when we find the temperature of the porridge that Goldilocks is eating, we look to the right to see how she will respond.

Kotlin gives us a powerful conditional called when, which enables us to basically write that same table in our code. Here’s how it looks.

Listing 3.1 - A when expression in Kotlin

Just to show how similar this is to our table, let’s add a little spacing and put the table next to it.

As you can see, this looks almost identical to our table above! Each line between the opening brace { and the closing brace } is just a row from our table.

The reaction variable will be assigned a different value depending on the value of the temperature variable:

To really understand when, let’s look at the different parts:

When writing code, we sometimes need to compare one value to another. In other words, we want to know if one value is greater than, less than, or equal to another value.

Kotlin gives us a variety of comparison operators that we can use for this purpose.

Each of these examples evaluates to a Boolean value that tells you whether the expression is true.

The when expression is quite helpful, and you’ll probably use it often. It also has some interesting characteristics. Let’s look at a few of them now.

Goldilocks just found some more porridge in the freezer, so let’s add another case for extremely cold temperatures:

Listing 3.2 - Adding a fourth branch to a when expression, for temperatures below zero.

In this code listing, because the temperature variable is set to -5, you might expect reaction to be set to "It's frigid!", but actually, it would be set to "It's too cold!".

Because Kotlin works through the when cases from top to bottom.

At this point, Kotlin uses "It's too cold!", because it found a matching condition. So, the third case - temperature < 0 - is never evaluated.

In other words, the first condition that evaluates to true will win.

Listing 3.3 - Correctly ordering the branches so that the below-zero condition will match

If you’ve written code in some other languages such as Java or C, you might have used a switch statement.

One important difference between a switch statement and Kotlin’s when expression is that switch statements have fall-through, which means that when one condition matches, all statements below it (even statements for other conditions) will run unless you remember to use a break statement.

In Kotlin, when has no fall-through, so only one case will get executed.

Sometimes, instead of checking for a range of values (e.g., “anything greater than 55”, or “anything less than 40”) we only need to check for an exact match.

After the Three Bears discovered how much Goldilocks liked their porridge, they decided to write a cookbook that includes all of their family recipes. They opened an online store and began selling their books. Since the book is so popular, they wanted to give discounts to people who buy multiple copies of it.

Listing 3.4 - A when expression with every condition using the equality operator (==)

However, Kotlin lets you shorten this up even more, by letting you specify a subject. Here’s how that looks:

Listing 3.5 - Using when with a subject

In this example, quantity is called the subject of the when expression. The subject can be any expression1, but here we just used the variable quantity. Because we used quantity as the subject, we no longer had to put quantity == in each condition!

There’s one more shortcut that Kotlin gives us, allowing us to make this even more concise. Since the price-per-book for 3 books is the same as that for 4 books, we can put those conditions on the same line, separated by a comma, like this:

Every Condition Must Be Accounted For

A when expression in Kotlin must include conditions for all possible values. For this reason, we say that a when expression must be exhaustive. This is also the reason that you usually need to include an else condition at the bottom.

Sometimes you can be exhaustive even without an else condition. For example, consider a Boolean expression. As you recall, Booleans have only two possible values - true and false.

Kotlin knows that a Boolean value can only ever be true or false. So, as long as we have a branch for both of those cases, then we won’t need an else case.

Listing 3.7 - A when expression that is exhaustive without an else branch

This isn’t the only occasion when you can omit the else condition. We’ll see this again when we learn about enum classes and sealed classes.

when expressions are a lot easier to read when the conditions, arrows, and values are all lined up into columns, because it makes it easy to visually scan.

To help with this, IntelliJ IDEA and Android Studio include a code formatter that will organize the spacing of your when expression so that it’s consistent. Here’s how it looks without (left) and with (right) the setting turned on.

To turn this on, open the Settings/Preferences menu, and then go to Editor -> Code Style -> Kotlin. Pick the Wrapping and Braces tab, and then place a checkmark next to Align ‘when’ branches in columns.

Once you turn this on, you can go to the Code menu, and choose Reformat Code. The file you have open currently will be reformatted according to the settings, which will now include when expressions that are nicely organized and easy to read!

The when expression is powerful, and as a Kotlin developer, you’ll use it a lot! But it can be a bit heavy-handed for simple Boolean checks like for our lightbulb above. For these cases, Kotlin gives us a second kind of conditional.

Here’s how it looks:

Listing 3.8 - An if expression in Kotlin

And here are the different pieces:

if is a keyword, like when. isLightbulbOn is the condition that is evaluated.

If you like, you may format this so that the branches are on different lines. For example:

You can also use braces { and } around the branches. Doing so allows you to add statements to the branches, like this:

Listing 3.10 - An if expression with braces, allowing for statements inside

It’s possible to use if for more than one condition. For example, remember our price-per-book lookup in Listing 3.5? We could rewrite it into an if expression, like this:

If you find yourself doing this, stop!

Use a when expression instead!

when and if as Statements

So far, we’ve used the when and if conditionals as expressions, but you can also use them as statements. Here’s an example of using an if statement in Kotlin:

Listing 3.12 - Using if as a statement rather than an expression

So far in this course, whenever we’ve needed to change a variable based on its existing value, such as needing to increase wattage by 12, we’ve written it plainly like this:

In Kotlin, there’s a shortcut for this, and here’s how it looks:

In Kotlin, it’s more common to use this shortcut, so from now on, we’ll write it this way.

In just three chapters, you’ve already learned a lot about Kotlin! You know about variables, types, expressions, statements, and functions. And in this chapter, you learned all about conditionals, including:

In this course, we’ve used a variety of types, such as integers, strings, and Booleans. In the next chapter, we’ll start putting variables and functions together to create our very own types, using classes and objects. These concepts will open many exciting possibilities for us to start writing more advanced programs. See you then!

Thanks to David Blanc, Raheel Naz, and Mohit for reviewing this chapter.